These Cities and States Have New Trick-or-Treating Regulations

Some cities may be forced to create rules and regulations around Halloween festivities this year as new cases of novel coronavirus continue to plague Americans. Health officials have long predicted a new surge in COVID-19 cases in the fall, as temperatures drop and the flu season approaches — all while celebrations, including Halloween, fast approach.

California health officials in Los Angeles County have already made headlines as one of the first groups to mandate new rules and regulations around Halloween. As the Los Angeles Times reports, officials tried to issue an outright ban on trick-or-treating altogether, telling residents that it would be near impossible to maintain safe social distance if everyone took to the streets on the same night. But officials had to reverse some of their new rules after facing a public outcry: “Even a pandemic can’t cancel Halloween,” L.A. County Supervisor Janice Hahn told the Times.

New guidance established by officials at the Centers for Disease Control and Prevention will likely push local event organizers to adapt their events, however. Even if local events aren’t canceled or adapted, it may benefit those at risk for severe complications to stay home this year. Elderly individuals and those with compromised immune systems are at greater risk for severe COVID-19 symptoms should they contract the disease. According to the CDC, these individuals should limit attending public events:

Skipping Halloween festivities is best for kids with a complex medical history, or at the very least, guardians should plan on speaking with a healthcare professional beforehand.

Which Halloween activities are canceled this year?

Each and every state, city, and county will have different guidance in place to keep the spread of coronavirus in check. But you can expect most local guidance to be based on national recommendations made by the CDC. These guidelines have changed over time; initially, there were suggested limits on how many people should gather in one place, and suggested self-quarantines for those who traveled.

Currently, specific crowd limitations have been replaced by tips for maintaining social distance and limiting the amount of individuals in one shared airspace — plus advice for controlling crowds before, during, and after the event takes place. Plus, CDC officials have split all events into various risk categories to help organizers plan a lower risk gathering.

Here are COVID-19 transmission risk categories for events, per the CDC:

With the CDC’s guidelines in mind, it’s safe to say that some Halloween traditions will likely not be safe during the pandemic, and could be restricted moving forward. Haunted houses, for one, put an elevated amount of people in poorly ventilated areas that are short on space. Halloween parties or events, like those at schools or community centers, will look vastly different this year, if they’re held at at all. And given that some states have travel restrictions to keep new cases at bay (CNN has published a full list of restrictions here), any sort of long-distance travel for Halloween tours in spooky locales will be more difficult, as well as risky.

Places where Halloween events are changing or canceled:

Some cities have already announced cancellations and new regulations surrounding Halloween events this year. Certain events may be already canceled or postponed due to current gathering restrictions in place in each state, which you can learn more about using AARP’s master guide to state-by-state crowd restrictions right here.

We’re sharing the highlights of which Halloween events are being impacted as we get closer to October 31st, and we’ll update this list with more information as it becomes available.

How to keep your family safe this Halloween:

Thankfully, the risks associated with heading out in your neighborhood can be greatly reduced with some planning ahead of Halloween. If you’re wanting to get out and trick or treat with your children in your local neighborhood, health experts say keeping your group limited to those living in your home (or in your pandemic “bubble“) can reduce the risk of spread. You’ll need to be prepared to keep your hands sanitized, avoid touching your face as much as possible, and work to practice keeping toys or costumes away from others with your kids beforehand. Of course, you’ll also need to keep a mask on while outside of your home — and your kids will need to do so too, which shouldn’t be too hard given how many costumes can be made better thanks to a mask this year.

Zee Krstic is a  is a health editor for GoodHousekeeping.com, where he covers the latest in health and nutrition news, decodes diet and fitness trends, and reviews the best products in the wellness aisle. 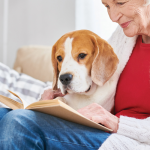 Emotional Support Animals and HOAs: What You Should KnowBlog